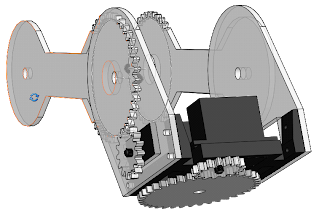 For my ECE senior design project I’m building a robotic arm for the NCSU Terrestrial Robotics Club as they take on the University Rover Challenge.

Ever wanted a high-strength robotic arm that’s made entirely of 3D prtinted and laser-cut parts and off-the-shelf compodents and electronics? I have, and that’s why I’m building it with my group of 4.

I put together a google site page to keep track of the project’s status and eventually host tutorials, APIs, and other documents you’ll need to build your own! Check it out.

The NCSU Aerial Robotics team went out to Dorothea to fly a few weekends ago, and RJ brought his 18 pound 88” wingspan 60cc Extra 300. Add my gopro, some handy ground footage, and a dubstep remix of ‘fly like an eagle’ and you get this:

This was taken on my friend Hardik’s Canon 60D. Music is from the band State Radio and the song: Wicker Plane.

I used ffmpeg extensively to get the 60fps video to slow-mo 30fps, then ffmpeg again to extract the audio to wav, then Sound Studio (mac app) to resample the audio to the same speed as the video. Next I used Sound Studio to splice, in rythem, the intro, solo, and final few seconds of ‘Wicker Plane’ together, then mix it together with the slow-mo sound of my quad and just imovie to put together the timeline of video.

Also take a look at the DIY-drones post I made, (it made it to the front page!).

Using an Phillips NXP LPC20148 ARM7 processor, a Nintendo Wii motion+, and some xbees I’ve made a really stable platform for quads. (mode details here) It is running FreeRTOS which makes it very expandable in the future. My old frame flew great with it, but I wanted something smaller. Enter my new carbon fiber mini-quad: